The South Western Hotel was built by the London & South Western railway company in 1872 to cater for the first class passengers of the ocean liner industry who traveled to Southampton and arrived at the adjacent Terminus station. The line was later extended so that passengers could arrive directly on the quayside. Famously some of Titanic's first class passengers (including White Star Line chairman J. Bruce Ismay) stayed there before departure.

For many years the hotel's roof was home to a large ball that was electrically triggered from Greenwich to drop at midday enabling ships in the harbour to set their clocks.

During the Second World War the hotel was requisitioned by the Royal Navy as HMS Shrapnel and used for administrative purposes. The building was never again used as a hotel, serving as offices before finally being converted into flats. It is now known as South Western House. 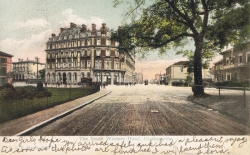 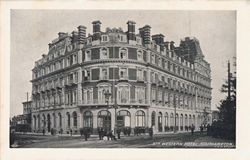 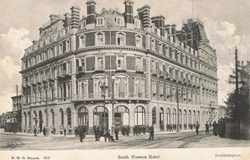