There is 1 card tagged Southbourne Pier

The 300 foot pier was built at a cost of £4,000 by Southbourne's founder Dr T.A. Compton in 1888 with the hope of establishing another Bournemouth. Regular boat-trips ran between the pier at Southbourne and the nearby pier at Bournemouth. During a fierce storm in December 1900 and again a few days later in 1901 the pier, promenade and nearby sea wall built were heavily damaged . The pier sat derelict for a number of years and it was eventually demolished in 1909 due to public safety concerns. 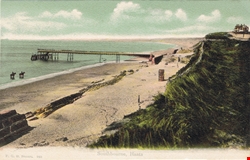