There are 4 cards tagged Floating Dock

Ordered from Armstrong Whitworth in Newcastle, the dry-dock arrived in 1924, a year after Stuart died, and was based at Berth 50. It measured 960 ft (290 m) by 134 ft (41 m) and was the largest such structure in the world. To use the facility, seawater would be allowed into its internal tanks to partially submerge it; a ship sailed in and the water would be pumped out. This raised the dock, taking the ship out of the water for repairs and maintenance. It could accommodate large ships such as the RMS Aquitania, but not very large ships such as the future RMS Queen Mary. The dock was moved to Portsmouth during the Second World War, and in 1959 it was sold to Rotterdam. In 1983 it was sold to Brazil, but it sank on the way there. 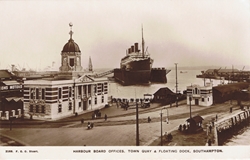 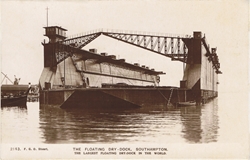 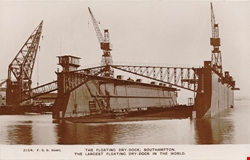